Kira Bre Clingen is a Master’s candidate at Harvard University’s Graduate School of Design. She is a 2016-2017 Thomas J. Watson Fellow, during which time she spent three months in Karen State, Myanmar

Karen State is one of seven minority-dominated states in Myanmar, a land-locked territory that borders two other ethnic minority states, Kayah and Mon States, and two Burman-dominated regions, namely Mandalay and Bago Regions.[i] Located in the southeast of Myanmar, bordering Thailand, various Karen military factions have been fighting the Myanmar Army, or Tatmadaw, since 1949, in a conflict that has become Asia’s longest running border war.[ii] 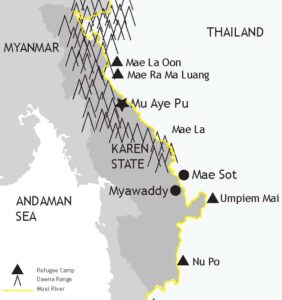 The strip of land between the Moei River, separating Thailand and Myanmar, and the mountains of the Dawna Range is largely inaccessible from the rest of Myanmar. Overland access to this area of Karen State is limited and dangerous – the Dawna Range is laden with landmines, planted throughout the ongoing Karen Conflict.

This area is under the control of the Karen National Union (KNU), a political organization with a military branch, the Karen National Liberation Army (KNLA). The vast majority of Karen State lies within areas of Burmese government control. While the KNU controlled a large territory within Karen State between 1949 and the early 1990s, it has since lost most of its liberated zones, and most Karen live outside of KNU territory in other areas of Myanmar, in Thailand or in Karen State itself.[iii]

However, there remain hundreds of villages that are exceptions, and remain under KNU control.  Many villages were razed during the Karen Conflict by the Tatmadaw or splinter Karen groups; their inhabitants joined over 146,000 other Karen refugees living in Thai camps along the Thai-Myanmar border.[iv]

Since a 2012 local ceasefire, followed by the 2015 Nationwide Ceasefire Agreement signed by the KNU and Myanmar government, there has been mounting pressure from the Thai and Burmese governments to repatriate refugees from the camps along the Thai-Myanmar border into Karen State.

Amongst the many challenges of repatriating indigenous Karen to their former homelands is a data problem: there is little census information on the number of inhabitants of Karen State at any point. Attempts to take a population census in Myanmar have faced significant challenges as areas of armed ethnic conflict are not counted, the Myanmar government does not recognize the citizenship of certain groups, most notably the Rohingya, and the population living in Thai refugee camps is difficult to quantify.

If census data is unclear for the human population of Karen State, collecting information on the flora and fauna within the territory is even more challenging. The half century of armed conflict has, perversely, preserved one of the world’s last remaining biodiversity hotspots in northern Karen State. Military clashes have prevented settlement, infrastructural development and resource extraction around the Dawna Range. Soldiers from the KNU, the Tatmadaw and the Tatmadaw-aligned Democratic Karen Buddhist Army (DKBA) have established small posts and laid landmines throughout the territory, but Karen State has been spared the environmental destruction of unchecked development that Myanmar has invited since opening itself to foreign industry in 2008.

Karen State has been called the “dark side of the moon” by biologists – as nearby regions are tallied for species richness and flora and fauna are tabulated, Karen State has remained largely unstudied by the domestic and international scientific communities. A 2008 survey within the protected Megatha Forest found 27 mammals, including six endangered species like the Sunda pangolin white handed gibbon. During the year-long survey, Megatha Forest faced poaching and illegal logging and mining within its protected boundaries.[v]

The only structured wildlife camera survey of Karen State in 2015 found 31 mammals, 17 of which are Near Threatened, Vulnerable or Facing Extinction on the IUCN red list. This list includes tigers, leopards, Asian elephants, sun bears, dholes and Asiatic golden cats, species whose numbers have collapsed due to deforestation throughout the rest of southeast Asia.[vi]

The survey was undertaken by the Karen Wildlife Conservation Initiative (KWCI), a collaborative including the KNU, Karen Forestry Department, the Karen Environmental and Social Action Network (KESAN) and an Australian conservation NGO, highlighting the potential of collaboration between the regional KNU government and international organizations for scientific research and data collection. The information collected as part of these surveys can inform a baseline for conservation in Karen State.

Following these initial surveys, KESAN established a series of local Karen Wildlife Protection Units (WPUs) to work with local Karen communities to maintain biodiversity while fighting poaching and creating agricultural and forest management systems.[vii] The WPU’s are embedded within villages like Mu Aye Pu to assist in conservation efforts. Yet the WPU’s are small groups of rangers defending a large territory from threats of individual poachers and illegal logging corporations, but also larger, less tangible threats like a vacant land law passed by the Myanmar government that allows the government to seize fallow, virgin and vacant land.

This legislation threatens projects that demand greater protection, including the Salween Peace Park, a KESAN project spearheaded by local grassroots Karen organizations that encompasses a 5,485 square kilometer reserve. The park includes over 340 villages, forest reserves, community forests and wildlife sanctuaries. Running along the Salween River Basin, the project, established in 2018, was a direct reaction against foreign development of a hydropower dam around the Salween River, while allowing indigenous Karen communities to maintain their culture and secure their land rights.[viii] The continuation of indigenous agricultural practices helps contribute to food security, and will assist as refugees return to Karen State and place greater demand on existing agricultural systems.

Without formal legal protections around clearly demarcated regions for wildlife conservation within Karen State, the WPU’s and larger, collaborative organizations like KESAN will not be able to preserve the remarkable biodiversity and forest systems within Karen State, while allowing for peaceful repatriation and rebuilding. This legal protection and designation requires the cooperation of various actors to be successful, including the Karen National Union and Karen governmental departments like the Forestry Department, civil society Karen organizations like KSEAN, international NGOs and research institutes – and the centralized Myanmar government.

Together, these actors must take action to establish a Karen State reserve that allows indigenous Karen to live on their ancestral land, repatriating Karen to leave refugee camps with dignity, and the biodiversity hot spot within Karen State to remain a refuge for threatened and endangered species. The rough boundaries of this territorial reserve have already been drawn – they are the areas of the Karen Conflict that have prevented exploitative development since 1949.

The 2015 ceasefire was the necessary first-step in the creation of a greater Karen State conservation reserve and accompanying research institute. Now, additional research must be undertaken safely. Secure routes of passage through the forest must be established by teams of international, Karen and Burmese scientists, along with clear research methodology that prioritizes the unique knowledge of Karen soldiers and indigenous people. International researchers and scientists will help to safeguard the area from further attacks, and the establishment of a permanent research institute will offer education and employment opportunities for Karen who live in the State today, and those who will leave Thai refugee camps in the near future.

Just like including the KNLA in plans for a Karen State reserve would take advantage of soldier’s intimate knowledge of the forest’s flora and fauna, including NGOs in establishing a broad, clearly demarcated Karen State reserve allows international actors to support the Karen people’s resettlement and biodiversity conservation without legitimizing an armed or political group. 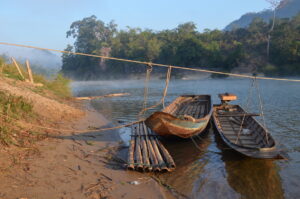 Rafts near Mu Aye Pu, a KNU controlled village, with Thailand visible on the left bank

The Myanmar government should be motivated to protect Karen State’s biodiversity reserves to address the larger goals of climate change mitigation, presented in June 2019 by the Myanmar Ministry of Natural Resources and Environmental Conservation (MoNREC) alongside the UNDP and the Myanmar Climate Change Alliance.[ix] Myanmar is one of the most vulnerable nations in the world to climate change, and its rampant deforestation after 2008 has made the country even more prone to sustained periods of drought. The establishment of a preserve in a pristine area will significantly aid the Myanmar government in meeting its climate goals.

As the forests of Karen State are de-mined and cleared of military encampments, a set of strict legislative laws and agreements between the Myanmar government and KNU must be passed simultaneously to legally protect the forests of Karen State. Anti-poaching and anti-military measures, as well as defenses against the illegal wildlife trade are necessary to ensure the survival of this remnant forest and its ecological value, as well as the security and protection of indigenous Karen and returning Karen refugees. Without a legal roadmap and collaboration between the Burmese government and Karen regional government, the de-mining of Karen State will be used as an opportunity for extractive and exploitative economic development that will cause environmental damage beyond repair. The forests of Karen State have only been protected because of the threat of violence and military equipment within it – without these dangers, the forest and its inhabitants are defenseless against the industrial and economic development schemes that have deforested the country.